Sheng-An Kuo was the first signing of 2007. Who's next? Well, the top two prospects are both in HS, although one is playing in Japan.

1)The top signable HS prospect gathering significant attention in Taiwan is Nan-Ying Vocational HS (This Tainan HS baseball powerhouse has produced current Dodgers: Hong-Chih Kuo and Ching-Lung Hu) OF Che-Hsuan Lin. Rumor has it that multiple MLB teams, including the Cubs, Reds, Red Sox, Phillies, Blue Jays, and Twins have interest in Lin. Arguably the top positional player on the island in his graduating HS class, the kid is blessed with a lot of plus tools. The 18 year old's (DOB: 9/21/88) best attribute is his outstanding speed. He has run a 10.9 in the 100m dash. Not only is he athletic, but he has a plus arm, hits for average, has above average power, and is plus-plus defensively. The 6'0 - 185 pounder bats and throws righty.

Lin competed for the Taiwanese junior NT in 2006 - a team that finished 5th at the 22nd AAA World Junior Baseball Championships. During the competition, Lin appeared in 8 games, starting all games in CF. In 34 AB's, he hit .353, slugged .471, cracked a double, a HR, scored 7 runs, had 2 RBI's and 2 SB's. He also played flawless defense with no errors in the field.

Lin burst onto the world stage in 2000 when he hit a grand slam (one of only 9 in Bronco Series history) in the Bronco League World Series (for kids 11-12 years old). He alongside fellow junior NT and HS teammate Kai-Wen Cheng, led their Tainan team to the 2000 Pony League (Bronco Division) World Series Championship.

In a year with a weak crop of graduating HS pitchers, Lin is expected to be the second member of the 2006 junior NT to join a MLB organization (the first being OF Wang-Wei Lin of the Minnesota Twins). Due to current CTBA rules, don't expect Lin's signing to become official until after he graduates HS.

Here is a video link (courtesy of Heavenly Star) of Nan-Ying in action. Lin is #8 in the white uniform and is the leadoff hitter in the video. 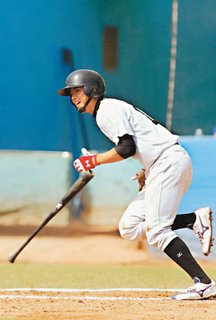 2)The other top prospect is LHP Heng-Hsiao Kuo, who is currently playing HS baseball in Japan. Kuo who stands 5'11" has a max fastball of 92 mph. H.H. Kuo is following in the footsteps of Chung-Shou Yang by playing at his alma mater - Fukuoka Daiichi HS. Kuo is joined by 2 other Taiwanese kids currently playing in Fukuoka, Japan. Kuo is good enough to be considered a possible first round pick in next year's NPB HS draft.