The HS class of 2009 is one of the deeper talent pools we've seen come out of Taiwan in quite some time. Young power arms -
Yao-Wen Chang (Mariners) 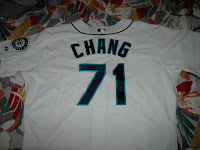 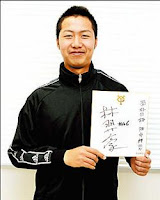 are members of this class who are already off of the table.
So who's left? Let's find out.........
(Info has been gathered from scouts, local coaches, and agents)

Despite winning a best pitcher award back during the SARS scare and being pursued by the Boston Red Sox and the NPB's Yakult Swallows since he was 15 years old, he has been somewhat under the radar over the past 2 years after mainly spending time as a power hitting infielder, which limited the number of innings he pitched. He showed his power by hitting a sizable HR against Taitung County's Cheng-Kung Business High School in the 2nd round of 2008's Taiwan Cup High School Tournament. He also got selected to the all-tournament team. But despite his power-hitting potential, his future is likely to be on the mound due to his fluid & smooth delivery. He has a good pro-typical pitcher's frame, good size, and a projectable build. He has a quality arm action that generates good arm strength requiring minimal effort. He is one of the hardest throwing pitchers in the '09 senior class with velocity that tops out at 91 MPH. He has a 3/4 arm slot with a full windup delivery. He has good movement of his fastball but his control and command can become erratic at times, likely as a result of his limited experience on the mound over the past 2 years. He offers a good changeup with above average potential but it can get inconsistent sometimes. He has a split-finger fastball which is decent at times but also inconsistent. He has a slider with late bite that he needs to utilize more to complement his changeup or split-finger fastball. He has strong makeup but will need to develop more confidence on the mound. Huang is of aboriginal descent and not surprisingly, his idol is RHP Chin-Hui Tsao. He has better size and delivery than RHP Tsao (at the same age) already. If he can improve his stuff over the course of this year, he has a chance to be the next top aboriginal pitcher out of Taiwan since Tsao.

He was highly regarded upon entering high school with a sweet left-handed swing with natural loft, power hitting potential, and a strong arm that allowed him to have velocity as high as 90mph on the mound as a 16 year-old player. He owns the prettiest left-handed swing in Taiwan since Boston Red Sox minor leaguer Chih-Hsien Chiang. However, 2 years later he has been a big disappointment despite his talent. He has had significant knee injuries on two occasions that have turned him into a below average runner. His work ethic has deteriorated in high school. His bat speed is slower. His defensive ability has worsened to the point that his head coach usually only plays him as DH role. Furthermore complicating the matter is his unstable family condition--his father is a rumored alcoholic. Despite all of these disappointments, he still managed to win the 2008 Taiwan Cup High School Tournament batting crown by hitting .675 and was the home run champion. However, his performance in the recent PONY tournament (Palomino World Series) was just so-so. He still has very good talent but it is unclear if he will be able to overcome these issues.

Under the radar and relatively unknown, Wang is the dark horse in this year's class. He has "projection" and "raw potential" written all over him. But he is a high risk, high reward type of prospect which is why he is ranked #3 on this list. You cannot blame him for being raw because he started playing baseball just 3 years ago; he was a basketball player and also ran track and field prior to becoming a baseball player. As one can likely conclude--he is a good athlete. He has the size that most Asian pitchers do not have. And despite his height, he has a decent delivery; however he only pitches from the stretch. With his height, he creates a very good angle to his pitches, especially having a high 3/4 arm slot. He has above average arm speed and already has a fastball that tops out at 89 MPH. His out-pitch is a split-finger fastball that can be nasty at times because of his height. He also has been working on a changeup and a curveball to complement his split-finger fastball. To top things off, he has a strong work ethic and has made significant strides to his delivery and velocity over the past 2 years. The main weaknesses with him are his erratic control and command and his limited experience. If he can improve in these areas, he could possibly move to #1 on this list in the near future. 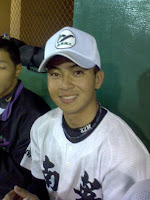 He has been followed closely since playing on the youth national team that participated in the Asia Cup held in Jakarta, Indonesia, 2 years ago. He adjusted slowly to the wood bat initially but has made significant strides over the past year. He has decent all-around tools and probably was the best player on the 2008 IBAF Taiwanese junior national team. He has the potential to hit for average and gap power. He has good bat control. His bat speed is just average but should get faster with strength training. His arm is close to average as he does have decent arm strength since he was the ace of his junior high school team when he was 15 years old. He has soft hands and the potential to have average range. His best future position is probably at second base because he does not have the power and arm strength to play 3rd base, which is the position he frequently plays in high school. He might have a shot at shortstop but does not have the natural fielding prowess that one might like to see. He does not run fast because he had knee surgery back in junior high school and most likely his running speed will continue to suffer as he puts on more weight in the future. He has a good work ethic but tends to over think at times while up at the plate. Overall, he is a poor man's version of Seattle Mariners 2B Yung-Chi Chen. He does not have the defensive ability of Los Angeles Dodgers SS Ching-Lung Hu nor the hitting/power potential of Boston Red Sox 2B Chih-Hsien Chiang.

He is a year older than all the players in the senior class because he started elementary school a year late - but he is the hardest throwing high school pitcher in the class of '09 as of now--he tops out at 92 MPH. He uses a quick arm to generate average velocity as his fastball sits in the 87-92 MPH range. His delivery is just okay but he does have a strong lower body. He complements his fastball with a slider and split-finger fastball, both are below average offerings at this time with the slider having a better chance of becoming an average pitch. He had lacked pitchability previously with poor command and control but he has improved on these aspects quite a bit over the past year. He has the potential to have above average velocity but there has been some question about his learning ability. He had some family issues in terms of guardianship but his high school head coach Lee was kind enough to take the responsibility and become his guardian. His signing bonus expectation is in the $200-300,000 range.
Posted by TTT at 7:00 PM

Cool website. Where did the $200,000 to $300,000 number come from for the pitcher named Cheng-Hao Wang? That's kind of a crazy number for a relatively unknown right handed pitcher. That's top 10 rounds in the US, easily. I think you're going overboard on that one.

That's a ballpark figure for what the kid is rumored to have been asking for....it's very common for some kids in Taiwan to have an inflated sense of their self-worth.

BK,
If you continue to have doubts, you should contact Coach Lee - Wang's coach and guardian.

Contact his coach? What am I, a newspaper reporter? Lol. I thought you were assuming that he will get that amount of money. I didn't realize that you meant that is the amount he is asking for. My fault.

It's understandable that anyone would want that much money. I'm just saying that $200,000 to $300,000 for a pitcher like that seems crazy. I'm no baseball expert, but I know that there are a lot of pitchers in the United States that fit the profile that you wrote about him on you blog, and who don't get that kind of offer. Where I'm from (Atlanta, Georgia) there are a lot of high school and college players like that.

i tried that but no info comes up on the links section when i click it...

My email addy is:
thetaiwaneseterror at yahoo dot com - at and dot have been spelled out to avoid spambots.

Very cool site. I followed the link to your blog from LoHud Yankees. It seems that you don't have a high expectation for Fu-Lin Kuo's future. Then why did Yankees sign him? What did they see in him?

One can only speculate what the Yankees see in Kuo.

But it should be obvious from his signing bonus amount (listed as ~$150 K), that there wasn't a bidding war for his services.

Scouting isn't an exact science, but obviously the Yankees saw something they liked in his bat.

Also, keep in mind that the Yankees' local scout - Ken Su has a good relationship with Kuo's agency - Octagon. Octagon is the one who recommended Ken Su to the Yankees.

Don't forget that the Yankees also spent $1 million USD on those 2 baseball players from China - where are they now and do you think they ever had a chance to make it to the ML level? Combine that with the fact that CMW is no longer with the Yanks and one might speculate that the Yankees are trying to keep their brand name in the forefront of those countries.

With all that said, hopefully Kuo proves all of his detractors wrong and has one helluva pro career.