I'll post some more pics of the entire CT basball team, a couple more pics of Lo, some of the signed baseballs I got, and a pic with Mr. Rod Dedeaux and me later. Stay tuned!
Posted by TTT at 7:24 PM 2 comments: 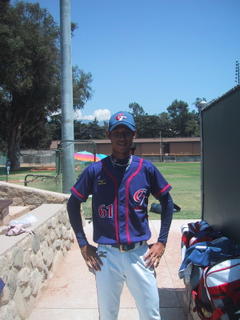 This kid is the tallest player for Chinese Taipei. The dude is 6'3"! Kuo-Hui Lo is the next tallest guy at 6'2". Tseng is a very friendly guy and easy to talk to; I was able to find out from him that Chih-Yuan Chen, star player with the Brother Elephants in Taiwan's CPBL, is his cousin!!!!! You got good genes kid!
Posted by TTT at 7:14 PM 3 comments:

Here is the info that I gathered from Saturday's mid day game:

I didn't keep stats for the 7/31/05 game vs. the Pasadena Redbirds. But I do have Lo's AB's chronicled in an earlier blog post.

It also has the stats for the 2 games played between the Chinese Taipei national team versus the USA team made up of collegiate all stars played on July 15th and 16th of 2005 in Taiwan.
Posted by TTT at 6:39 PM No comments:

I attended the game today in Pasadena at Jackie Robinson Field - near the Rose Bowl. Chinese Taipei and Pasadena played a 9 inning affair, with Chinese Taipei triumphing 9 - 2. Lo Kuo Hui had a disappointing game compared to yesterday's offensive outburst (see earlier blog posting). In his 4 AB's he had 1) a flyout - sac fly scoring a runner from third 2) struck out looking - he was facing a 6'6 kid from Rancho Cucamonga who was clocked in the low 90's today. From what I was told, the tall pitcher playing for Pasadena had about 25 scouts in the stands with their radar guns zoned in on his fastball. I was informed that his best fastball maxed out at around 95 mph. 3) walked and scored a run 4) popped out to shallow right field.


I found out from the Pasadena score keeper and Mr. Chuck Poehler - who sponsors/owns the Redbirds that the Redbirds are made up of ex-professional baseball players - many of whom have played in the minors as well as aspiring baseball players from high school. Actually today, Chinese Taipei got an opportunity to face Steve Rain, and ex-MLB player with the Chicago Cubs (1999-00) for a few innings in the middle of the game. The highlight of my day was when I got the opportunity to meet Mr. Rod Dedeaux, the legendary USC head baseball coach. I got the chance to ask Mr. Dedeaux on his opinion of the Chinese Taipei team and players. He thought that there were quite a few outstanding players on the CT team in addition to Lo Kuo Hui. Mr. Dedeaux pointed out #11 Ying Chieg Liao, an OF - LF, and #21 Ko-Chien Lin, the SS for CT as 2 kids who caught his eye. Many thanks to the Pasadena Redbirds scorekeeper - sorry I forgot your name, Mr. Chuck Poehler, and Mr. Rod Dedeaux for their input and time!!!


If you are still interested in catching the Chinese Taipei national team in their exhibition tour of Southern Cal, there are still a few games to be played this week. I am only aware of 2 of the game times. They are 1) a 10:00 am game at Dodger Stadium this Wednesday 8/3/05 against a team unbeknownst to me 2) the closing game of the US/So Cal tour at USC's Dedeaux field on Friday 8/5/05 at 3:00 pm against the Area Code Team - which should make for a very competitive game.
Posted by TTT at 5:42 PM No comments:

The Great Wall and lil ol me 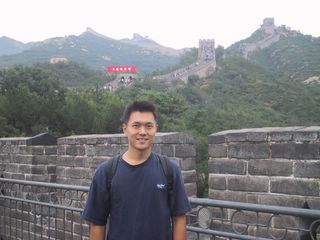 This photo was taken in September of 2002, when I was vacationing in China with my wife and in-laws.
Posted by TTT at 12:04 AM No comments: 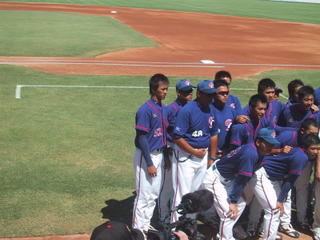 Lo is standing at the very end (Left side), posing with teammates 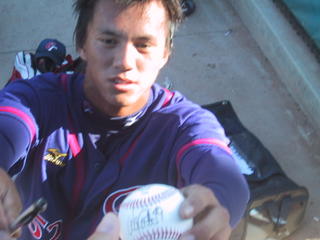 Lo handing me his neat penmanship on that ball! Autographed balls in Chinese are so much cooler than in English. 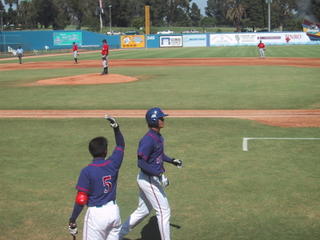 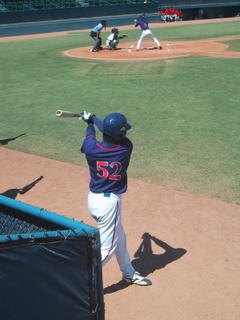 This is Lo in the on deck circle - hacking away 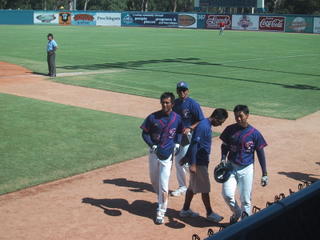 Lo being greeted by teammates after his HR!

I could only get one pic uploaded on the first page. Here's another attempt at more.
PS Please do not use my images without my consent first. Thank you. 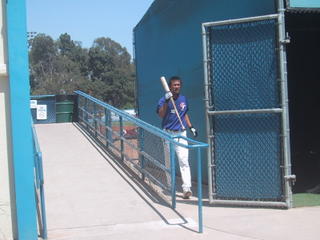 Well, I attended my first official Chinese Taipei Baseball Team game today (7/30/05 against the Long Beach Armada/Samurai Bears split squad. The game was played down in Long Beach at Blair Field, home of the LB Armada and Long Beach State 49ers. I first found out about the game online from the LB Armada website.


Being an ABC and the fact that my parents are from Taiwan, I grew up in PA, following little league baseball in Williamsport. My curiosity and interest in Taiwanese baseball - and baseball in general, began then when I realized how talented these kids were at such a young age. As I grew older, I always wondered what happened to these wonder kids. My first researched foray into Taiwanese baseball was from a Sports Illustrated article written in August 19, 1991 titled, "Where Have you Gone Yu Hong-Kai?" Then, with the explosion of the world wide web, I began searching for everything related to baseball in Taiwan. But because I can't read Chinese, my sources were limited to English only sites. What I did find out though from limited resources, was that most of the kids who were good enough played for the national team in different bracketed age groups. The most talented players were usually signed by professional team in Japan - (most famous example - Tai-Yuan Kuo, nicknamed the "Orient Express" who played for the Seibu Lions) while other players were signed to play in a domestic professional baseball league in Taiwan - known as the CPBL nowadays. Finally with the signing of Chin-Feng Chen by the LA Dodgers in 1999, I realized that things had come full circle. These same Taiwanese kids have grown up and are here today to try and realize the American dream: to make a Major League Club.


Ok, now onto today's game. It was a 7 inning exhibition game that began at 3:05 pm PST. Going into the game, I really only knew of one player Kuo Hui Lo - a 19 year OF for the Chinese Taipei Team. This kid was just recently signed by the Seattle Mariners. Lo was easily the most impressive player in the game. He had 4 AB's: 2 walks, a stolen base, a triple, and a home run, while driving in 4 runs. The kid was a stud. The starting pitcher for Chinese Taipei - Ying Feng Tsai wasn't too shabby either, throwing a 5 inning no hitter. Probably the highlight of my day was getting Lo and Warren Cromartie's autograph. Mr. Cromartie, if you don't know is an ex-MLB player with the former Montreal Expos. But he is more well known as one of Japan's great foreign players when he played with the Yomiuri Giants. Warren is the current head coach of the Samurai Bears, an all Japanese team playing in the Golden Baseball League. I have posted a few pics of Lo - # 52. I will try and post more later when I figure out this blogging thing. :) Enjoy!

PS Please do not use my images without my consent first. Thank you.
Posted by TTT at 10:20 PM No comments: