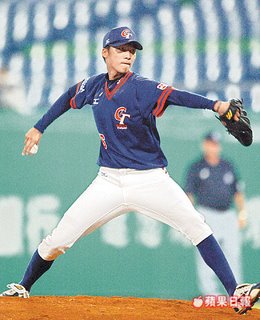 As posted by someone in the comments section, the Colorado Rockies signed their latest prospect from Taiwan - Sheng-An Kuo. Following in the footsteps of Tsao and Lo, Kuo is the 3rd pitching prospect the Rockies have signed from Taiwan. The 21 year old received a signing bonus rumored to be in the ballpark of around $150 to 200 K. The 6'4" 185 pound righty, follows in the footsteps of onetime teammate Ching-Lung Lo. As chronicled a while back, Kuo and Lo teamed up to lead their Tainan team to the 2000 Pony League World Series title (for 13 to 14 year olds). Following the title game, C.L. Lo went on to bigger and better things when he was signed by the Rockies as a 16 year old. Nearly 5 years later after having his career sidetracked by injuries, Kuo now gets his opportunity to live up to the advanced billing that had some hailing Kuo as a future Major Leaguer when he was a teen. Despite only clocking 85 mph on his fastball, the Rockies like his projectability and size.
Posted by TTT at 7:35 PM 17 comments:

For the Dodgers after passing his physical on Monday. He's officially a Dodger!
As thin as the Rockies' bullpen is, it leaves you scratching your head as to why the Rockies gave up so easily on Tsao, despite investing so much in the young man.
Posted by TTT at 10:13 PM 4 comments: 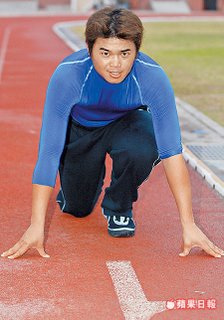 Scout.com named Hu as the 18th best prospect in the Dodgers farm system.
Here's what Bill Shelley had to say about Hu in his scouting report:

Those who have been saying that Hu couldn't hit in the tougher leagues got their chance to cry, "I told you so" when he averaged only .254 with five homers after moving up to AA in 2006. And he didnt' do any better in the Arizona Fall League, either.

His detractors have always maintained this because of his small build. Smallish he is but he's compact, very muscular and does have some juice in his bat. And he actually did hit well in the pre-season World Classic and in the post-season Asian Cup while playing for his native Taiwan.

In the Southern League pitchers had success pounding him inside when he didn't get the bat around quickly enough. He's a gap hitter when right and has adjusted, moving away some to better handle the inside half but he can't get too far away because his arms are short.

With all that he continued to sparkle in the field. He has excellent range, soft hands, and good coordination. His arm is about average. All in all, he was the best at his position in his league so while his hitting did fall off, he's still a candidate to play in the big leagues. And .254 isn't all that bad for a shortstop, anyway.

He should take another step forward in 2007, playing at Las Vegas.

CK YANG
The only Taiwanese athlete to have ever graced the cover of Sports Illustrated
Long before baseball became the craze of our homeland, Taiwanese athlete C.K. Yang made us all proud when he won Taiwan's first ever Olympic medal. Winning a silver medal in the decathalon during the 1960 Olympics, losing only to close friend and fellow Bruin Rafer Johnson, C.K. Yang left an indelible mark in the sport, cementing his status and claim to "the world's greatest athlete." Also known as the "Iron Man of Asia", Yang was the one-time world record holder in the decathalon.
Yang passed away on Saturday in Los Angeles. He was 74 years old. RIP CK; thanks for being such an inspiration to us all.
Posted by TTT at 12:01 AM 5 comments: 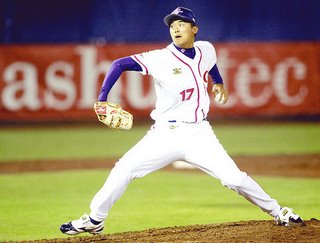 Scout.com released Cheng's scouting report today. Downgraded as the 21st best prospect in the system due to his current injury/rehab status, Cheng features a "filthy Major League ready curveball" in his repertoire. Cheng will need to continue to work on commanding his fastball as he climbs the organizational ladder. For more on Cheng, read here.
Posted by TTT at 7:57 PM No comments: 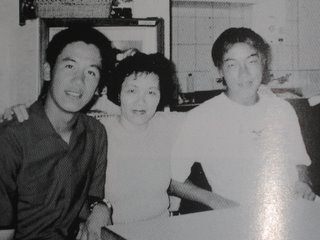 Tsao and Kuo - Back in the Day

Well I'm sure most of you have heard by now; the LA Dodgers signed Chin-Hui Tsao today. Terms of the deal are conditional pending a physical upon Tsao's return to the US. Tsao will be reunited with one time rival and good friend Hong-Chih Kuo. Despite multiple injuries diminishing the ability of both players, the resilience and dedication shown by both men is a testament to their strong determination and will. Here's to hoping both 25 year olds remain healthy and continue to inspire us all!
Posted by TTT at 10:48 PM 5 comments:

Brief Job Description:
You will be employed by a Major League organization and serve as a translator (Mandarin Chinese is a must) for minor league Taiwanese baseball player(s) during this upcoming 2007 season.


With the season rapidly approaching, there is an urgency to fill this position ASAP.
If you are interested, please contact me (see right hand side - under links) for further info.
Posted by TTT at 10:39 PM 7 comments: 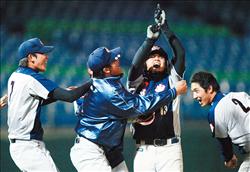 Well, as reported by Maos, Taichung Gao Nong HS defeated Kupao HS 5-2 to earn the bragging rights of being crowned the national HS champs. Taichung was led by lefty Chen-Yu Hong, pictured below, who earned the win in relief of starter Wei-Da Su. 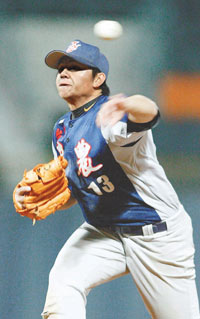 Here's a link to a video recap of the championship game. (Vid - courtesy of bitpopch, is in Chinese)
Posted by TTT at 12:00 AM 2 comments:

This is a sweet looking auto of Cleveland Indians farmhand Sung-Wei Tseng. Overpriced on Ebay, the card is being sold directly by the card manufacturer - Just Minors. The first authenticated autos of Chi-Hung Cheng and Yung-Chi Chen are also listed, but won't be available until mid-January.
Posted by TTT at 8:24 PM 6 comments:

Here's an update on the national HS baseball tourney going on in Taiwan. Some of the top senior performers at the tourney include: 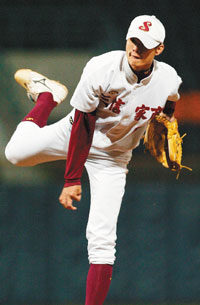 Ying-Shan Wang (RHP)
Clocked at a high of 86 mph 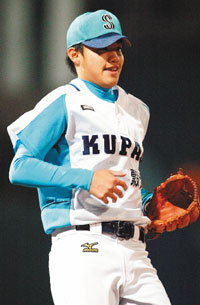 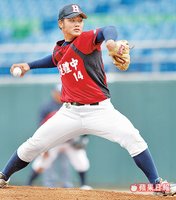 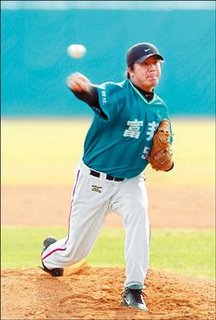 Tsao in action
Pitching on 3 days rest after a 4 inning stint on Friday, Chin-Hui Tsao made another appearance on Tuesday, this time facing off against much stiffer competition in a warmup match. Some of the bigger named batters Tsao faced off against included:
Wei-Chu Lin (Tigers), 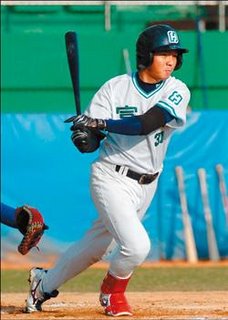 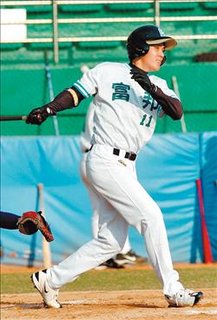 In a followup to Tsao's outing on Friday, here are a few vids of his performance. 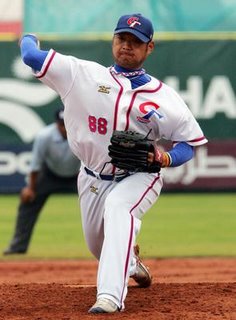 In ranking the top 50 Blue Jays prospects for 2007 per Scout.com, Chi-Hung Cheng was ranked #21 - downgraded due to the likelihood of losing one year of development while recovering from a torn labrum.
Po-Hsuan Keng was ranked #37. Here's his in-depth report, courtesy of Scout.com:

The Toronto Blue Jays signed Po-Hsuan Keng as an international free agent in September of 2004, for approximately $225,000. Keng was superb this past season with the Lansing Lugnuts, and put himself on the prospect radar.

This was the second season in professional baseball for Keng. After the 22 year old was signed from Taiwan in 2004, he bypassed rookie ball and short-season baseball. The Jays decided to begin Keng at Class A Lansing and he spent the season moving between the rotation and the bullpen. It was a disappointing season for the righthander who went 5-5 with a 5.08 ERA in 79 2/3 innings.

After a season of acclimating himself to pro baseball and the American lifestyle, Keng repeated Lansing - this time strictly as a reliever. Keng bounced back with an outstanding season going 1-4 with a 2.33 ERA in 69 2/3 innings, before receiving a promotion to High A Dunedin to finish off the season.

"He's a ground ball pitcher, who can pitch effectively against both right-handed and left-handed batters," noted one scout. "He profiles very well as a reliever if he can gain command on his breaking pitches."

Keng improved slightly on his command, but needs to develop more consistent mechanics if he wants to maximize his success in pro ball.

Fastball: Keng is not overpowering on the mound. His fastball was clocked between 88-91 mph this season, and it does not top out more than 91. He does a good job in keeping his fastball at batters knees, but has not yet mastered full command of it. He's still working on locating it consistently on the corners.

Secondary Pitches: Keng is basically a two-pitch pitcher, with a slider/sinker as his other pitches. Most scouts call is a slider, while others call it a sinker/splitter. Keng has not yet figured out how to command this pitch consistently, which yields high walk totals.

Projection: The reason the right-hander was put in the starting rotation in 2005 was to give him a chance to throw more innings and work on his entire repertoire. Keng is a reliever, and will not succeed as a starting pitcher.

ETA: Scouts are split about his future. Some believe he will need a combined 3 seasons to pass Double A, while others think he can reach Double A by 2007 and Triple A by 2008. How he performs this coming season will go a long way to mapping out his future. 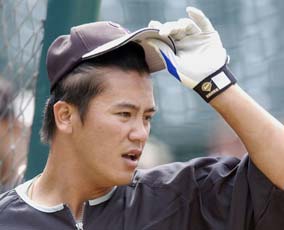 With the success of Chien-Ming Wang and to a lesser extent - Hong-Chih Kuo, I'm sure it has been tough for Chin-Hui Tsao to have to sit back and watch his fellow countrymen represent on the world's biggest stage. After being released by the Rockies in December, Tsao has been back in Taiwan recuperating. In a bit of encouraging news, Tsao participated in a warmup game for Taipei Sports College on Friday. Playing against Jiayi University, he threw 4 innings with a pitch count of around 49 to 50 pitches. He was clocked at a high of 94 mph. There were no reports of shoulder discomfort after his session. Health-permitting, hopefully as Tsao continues to get stronger, he'll get another shot with another MLB club soon.
Posted by TTT at 9:14 PM 3 comments: