The WBC should be intended as a way of promoting the sport of baseball worldwide. Having China compete in the WBC is great for growth of the sport in the world's most populous country. I know that MLB would love to see a Chinese star in the majors. Much like the Yao Ming/NBA scenario, success breeds imitation-idolization, which would ultimately lead to a huge potential increase in MLB revenues. Bottom line: MLB views China as a huge untapped market.

Unfortunately, when sports - $$$ - and politics collide, something has to give. In this case, Taiwan has been forced by MLB and China to cede it's name, it's flag, and it's national anthem during the WBC. This is nothing new to the people of Taiwan. Ever since the IOC's ruling in 1979 to recognize China (P.R.O.C.) as a member of the IOC, Taiwan has been relegated to the status of a "secondary citizen" and is forced to be recognized under the title "Chinese Taipei."

Every time I see Taiwan's unis - with it's Chinese Taipei logo - it reminds me of the socio-economic political clout that China uses to bully around it's island neighbor to the east.

Good read on a controversial subject that hits home with me.

Well in the United States, ESPN has garnered the TV rights for the upcoming WBC. However, the games will only be seen on ESPN 2 and ESPN Deportes, with the Semis and Championship game to be broadcast on ESPN.
CT's matchup with Japan will be shown on ESPN 2, but it's 2 other Asian regional matchups will be shown on ESPN Deportes. My cable company unfortunately only offers ESPN and ESPN 2, so I will only be able to catch the CT game versus Japan.
Here's the link for ESPN TV's schedule for the WBC.
Posted by TTT at 9:48 PM 2 comments:

Kuo and Odds on Taiwan's Chances...

The Dodgers have given Kuo the green light to participate in the WBC. Having Kuo is a huge plus especially in light of recent rules established by the WBC to help protect pitchers' throwing arms. Taiwan needs as many quality arms as possible for this tourney.

The new rules state that in round one games (for Taiwan - the Asian regional), pitchers will be limited to 65 pitches, and if they pitch in excess of 50 pitches - will be ineligible to pitch for 4 days following the outing. Also a one day rest period is automatically implemented for any pitcher whose count goes over 30 pitches. Last but not least, pitchers are not allowed to pitch more than 2 consecutive days.

Those rules definitely reward teams that have a deep pitching staff, a luxury that Taiwan does NOT have. Taiwan's biggest problem is that if it is to advance deep in this tournament, it will need it's starting pitchers other than Wang (if he's allowed to play), to step up big time and keep the game in reach for it's hitters.

Surprisingly, Sportsbook.com has Taiwan as a 15-1 favorite to win it all. Essentially, Sportsbook.com thinks that Taiwan has the 6th best team in the world!!! The gambling website has the US and Dominican Republic as the 2 teams to beat, followed by Venezuela, Japan, Puerto Rico, our BOYS!!!, and then South Korea. I would be pretty stoked with a top 6 finish, considering all the talent out there.
Posted by TTT at 1:22 AM No comments:

In preparation for the World Baseball Classic, Taiwan's NT will be traveling to Australia from Feb. 2nd to the 12th to face off against the Perth Heat and the Australian NT.

There's not too much to report during these slow times, but it appears that the Yankees are putting more pressure on Wang to not participate in the WBC because of past arm problems.

If that is the case, Ching-Lung Lo would probably be the first alternate called up to the 30 man roster. It seems as if Lo's been in the Rockies minor league system forever, but remember, he's still only 20 years old.

The majority of players for the NT have returned to their respective ball clubs in the US and Japan for spring training and will rejoin the team shortly before the WBC Asian regional begins in March.
Posted by TTT at 5:52 PM 2 comments:

There are a few players that I'm surprised were ommitted from this list:
1)Chih-Yuan Chen - OF : Has always been one of the better hitters/OF's in the CPBL
2)Wei-Yin Chen - LHP : Has NPB experience - great upside for a young lefty
3)Ching-Lung Lo - RHP : Probably would have been the most physically imposing player for NT/great upside
4)Chia-Hao Chang - SS/OF : His defensive versatility is a huge plus, plus he has a decent bat

Surprised by the following selections:
1)Sung-Wei Tseng - short amateur player who was probably selected due to an outstanding summer in Alaska and showing in Holland
2)Chung-Shou Yang - youngest member on the team, might be overmatched on the offensive side of the field - will he see any PT?
3)Chih-Yao Chan - amateur OF beat out CY Chen?!

In comparing Taiwan's NT roster with that of Japan and South Korea, there seems to be a talent disparity. Let's hope the players that represent the cream of the crop for Taiwan (Wang, Chen, and Kuo) are able to come through with big plays in the Asian regional.
Posted by TTT at 1:11 AM 2 comments:

Will post the roster once the announcement has been made.
Posted by TTT at 9:57 PM No comments:

The NT has been holding scrimmages among a split squad - blue vs. white.

Overseas players: Lo, Chen, Cheng, Keng, Yang, and Chiang all got a chance to show their stuff. Overall, no one exhibited anything overpowering and there were some control issues.

Pitching notes:
Ching-Lung Lo has looked good - he was clocked around 90 mph.

Chi-Hung Cheng was clocked around 87 mph.

Po-Hsuan Keng accidentally plunked OF Kuo-Hui Lo, who was forced to leave the game with a bloody nose and a swollen left cheek.

With the lack of a "feared" established middle of the lineup hitter (Chin-Feng Chen and Chien-Ming Peng are both recovering from injuries) - the coaches have been happy with the hot bat of Wei-Tsu Lin.
He is getting a good look from the coaches to hit in the 3rd through 5th spots should either of the above-mentioned players be unable to play in the WBC.

Chun-Yu Kuo has also hit well in the scrimmages.
Posted by TTT at 12:11 AM 2 comments:

I was saddened to hear that USC baseball coaching legend Rod Dedeaux passed away today. I had the honor of meeting him this past summer. Not only was he a giant in the US collegiate ranks, but he was a goodwill ambassador for the international game of baseball. I had the good fortune of watching the Taiwanese NT play this summer in Southern Cal thanks in part to Mr. Dedeaux's connections and his willingness to see the game become a bridge for different nations and cultures to share a common interest.

RIP Rod Dedeaux. You will be missed dearly.
Posted by TTT at 11:19 PM 2 comments:

What surprised me is this line of text,

" It (Chen's contract) also includes a comprehensive plan for his career and measures to ensure the safety of his family members from criminal attention."

Wow, I had no idea that things in Taiwan could get that bad. It reminds me of the ML baseball players from Venezuela who struggle with crime because of the fact that they are high profile, well-paid athletes.
Posted by TTT at 9:06 PM 4 comments: 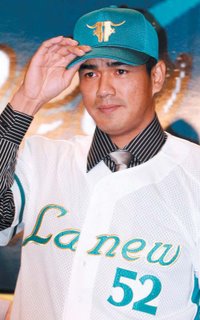 I still can't get over Chen not wearing some form of blue and white. Chen has officially agreed to a record-breaking deal with the LA New Bears. He gets a 3 year deal worth 10 million NT (~ $311,000 US dollars) annually.

I'm surprised that Chen did not ask for at least 15 million NT/3 years - the amount offered to Taiwanese basketball superstar Hsin-An Chen by ETSN. However, the 10 millon NT/3 year deal does not include bonus incentives.

Pic and News from here.
Posted by TTT at 8:37 PM No comments:

It has been confirmed that the Boston Red Sox have signed D.J. Yeh, a LHP for around an $80,000 US dollar signing bonus (bonus amount unconfirmed). Yeh became a controversial figure in Taiwan, when it became apparent that this year's CPBL #3 draft pick decided that he wanted to give the US minors a shot despite making himself available for the CPBL draft. Yeh became a hot commodity upon his return to baseball after a 4 year lay off from the game. Yeh, who had been scouted by several ML organizations in his HS days, was throwing around 92 MPH in his prime. Although recently his fastball has been clocked in the mid to high 80's range, the time off can only benefit Yeh and hopefully help avoid the arm problems that many Taiwanese pitchers have faced.

Several young HS baseball players in Taiwan are currently being scouted by several ML organizations during Taiwan's current HS national tourney. Led by the Red Sox, Braves, and Dodgers and their strong international scouting program, three kids have caught the eyes of these scouts. They are:
1)Tzu-Kai Chiu - LHP: DOB: 9/14/87 Stands 6'0 tall, weighs close to 200 pounds. Throws around 89 to 90 mph max. This kid has been on the youth national team scene for a while now. In 2003, he led Taiwan to the gold by beating both South Korea and Japan in the Asian Youth Championships. At the time, the Colorado Rockies were pursuing Chiu pretty heavily after establishing the Tsao and Lo pitching pipeline. Chiu was also on the 2003 World Youth Baseball Championship silver medal winning team. Chiu started the title game against the US, but took the loss in that game. Chiu then represented Chinese Taipei at the abbreviated 2004 World Junior Baseball Championships where he went 1-1 (W/L), had a 0.00 ERA and K'd 4 in 2.1 IP.
2) Hung-Chen Lai - another LHP: Mentioned in an earlier post - see the Nov. 25, 2005 post, the kid is an undersized (5'9") athlete, who projects to be a pitcher at the next level. Lai also throws close to 90 mph max. The Red Sox are interested in the kid, but will probably wait until he physically matures - which might mean he will have to play some collegiate baseball before he gets his shot over in the US.
3)Chih-Hsien Chiang - IF : Profiled in an earlier blog posting.
Posted by TTT at 1:01 AM 2 comments:

In recently announced news, Jae Seo of the NY Mets has agreed to play for his country. In my opinion, this guy is the ace of a Korean pitching staff that includes 6 major leaguers: C.H. Park of the SD Padres, D.S. Koo & Seo with the NY Mets, Sunny Kim & B.H. Kim of the Col. Rockies, and Jung Bong of the Cincy Reds.

Seo is one of the favorites to start against Taiwan in the Baseball Classic opener March 3rd in Tokyo, Japan. In 2005 with the Mets, Seo had an 8-2 W/L record along with a sparkling 2.59 ERA. Check out the rest of his stats here.

In a must-win game for Taiwan, Coach Lin would have to counter with his team's ace: C.M. Wang - assuming that the Yanks give him the green light. H.C. Kuo would probably pitch in relief if and when Wang hits his targeted pitching count limit.