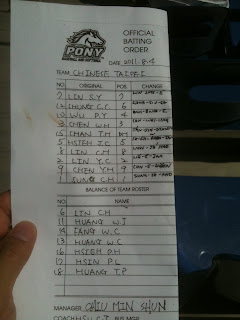 At the Palomino World Series, the Taiwanese reps lost their first game 5-4 on Thursday.   Team ace Chia-Hao Sung started for the squad  Read more from here:
"Lynnhaven 5, Taiwan 4. It was another nail biter for Lynnhaven fans with Lynnhaven’s first lead of the game not coming until the final out of the game. Taiwan jumped ahead with their first two batters of the game scoring. Lynnhaven scored 1 in the bottom of the 1st when Ryan Cook singled in Butt who had walked and advanced to second on Terrell Joyce’s single. Taiwan added 2 more in the 3rd with 4 singles, a sac and a fielder’s choice. In the bottom of the 3rd, Lynnhaven narrowed the gap with a single run; Joyce singled to right and scored on Cook’s triple to right center. The score remained 4-2 until the bottom of the 5th when Joyce hit a booming solo home run to left field to make the score 4-3. Lynnhaven tied the game in the bottom of the 6th. Adam Posey led off with a double to left center and scored on Greg Tomchick’s single up the middle. In the bottom of the 7th, Butt walked on a full count, advanced to 2nd on Nick Thompson’s single down the 3rd base line, advanced to 3rd on Joyce’s fly out to right center field and scored on Posey’s sac fly to left field. Rian Ellis pitched the complete game to earn the win, allowing only 1 base runner after the 3rd inning." The team will now have to win tomorrow against Puerto Rico or else their trip to the US will be cut short.


***CH Chiang is now with the Mariners organization.   From Peter Gammons:
One scout said, "I had 'marginal prospect' in on [Chih-Hsien Chiang] last summer, and this July, I had him in as an everyday big leaguer. Everything changed." It had to do with managing diabetes. The Mets wanted Chiang in a deal for Carlos Beltran; the Mariners insisted on him in the Bedard deal.


***CMW lost his second start against the Braves.


***Taiwan won the Asia-Pacific Regionals and will rep A-P at the Pony League World Series.
Posted by TTT at 10:36 PM No comments: